CHERUB is a book series that I read, I started reading CHERUB because my teacher, uala recommended it and I would of started reading it anyway because my brother reads CHERUB. I just started reading the forth book in the series and so far my favourite book in the series  is the 3rd one called Maximum security I'd rate it 8/10 there's 12/13 CHERUB books, and there's a 2nd CHERUB series that has 4 books so far. The reason I did 12/13 before was because one of the books is part 8 and a half  thats called Dark Sun, I haven't read it so I'm not sure what it has in it but it's not actually part of the series it's just an extra book in the series. There is another series that's about how CHERUB was made, it's called Henderson's boys and its got 7 books in the series. All these books are written by a guy called: Robert Muchamore, there's also another series of books that doesn't actually have a name for the series but I call it the Rock war series because the first book in the series is called Rock war,I'm not sure how many books there are in the series but I'm guessing at least 5 books, by the way the Rock War series has nothing to do with CHERUB, it's not in the same world or anything. If your wondering what CHERUB is it's a thing where kids go on missions and get bad guys wich it TERRIBLE, the main character is called: James. The reason I do CHERUB in capital letters is because CHERUB stands for something and I'm quite sure that the H in CHERUB stands for Henderson but I don't know what the rest stands for, I'd recommend if you start reading the first book called: The Recruit. CHERUB is a great series and you should read it. 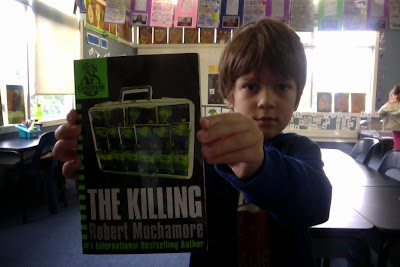 Thanks for telling us about the Cherub series Finch, I wondered what they were about! Very enlightening. Good on you for tackling them.