On Sunday the 20st of September 2015 I went to my karate grading. That's when I have to show my instructors my forms self defence sets and my sets. If we didn't follow an instruction quickly a enough we had to do 10 or 5 push ups or more. After we showed our sets ,forms,and self defence sets we had to spare against each other and ground fight. Ground fighting is when you can take down someone and hop on top of them. My partner got me down but I  kind of escaped. After sparing we had to take of our gear and go on one knee will the grading panel went outside and talked about our grading. I passed and became an orange advanced. I even got a certificate. After my grading I was really proud of myself for my grading. I really enjoyed grading. 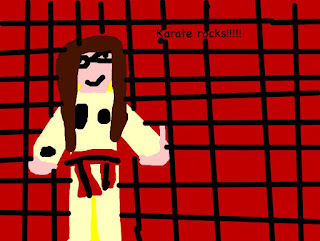 Karate is a good physical exercise. This is come under the art category Marshall arts. Both boys and girls can learn this. The post you have created here regarding this is a welcoming one and you have done it in good way of presentation.

Holiday Palace We are authorized to play the game online boasts Sectionals. The gambling games you have to play games on the gaming density. To bet on all games that you've come to the casino to play overwhelmed. That will help you make the game all you have to experience a lot of fun.
Along the way, we also have a style of play gambling games online. The players will have to choose to play casino games online are varied and full of fun to make your players you have to choose a profit on the play. online easily at any time.
Moreover, we also have a frame of the game to gamble online gambling games in a row that everyone has come into contact with a thirst to play optimally. For connoisseurs of the game, you have come to the greed of the online gaming market has been on a regular basis. Gclub


Panerai watches are undeniably sexy and have an excellent brand image. Not always the watch for when you want something horologically interesting on your wrist, they are a great default Replica Panerai watches for days you want something “simply nice” on your wrist. Still a jeweler in spirit, Replica Panerai Watches strives for that polished high-end look as opposed to being overtly avant garde.Replica Panerai Watches make some of the most eye-catching watches I was finding a new tote Valentino handbags I could use to go to work and also carry my Ipad around when necessary.

Given article is very helpful and very useful for my admin, and pardon me permission to share articles here hopefully helped :

Nice to be visiting your blog, it has been months for me. Well this article that i’ve been waited for so long.