On Friday the 23rd of August Room 13 and Room 15 did the speech finals. There was 7 people that got into the finals we had the speech finals in our classroom. Stella and Felix were the mc`s for the speech finals an Liesel and Mr Barker were the judges. The people that got into the finals were Holly doing her speech on why her uncle should stop smoking and then Paloma doing her speech on why you should be a vegeterian. The third person was Lotta doing her speech on why things shouldnt be called man made they should be person made. After Lotta it was Leo doing his speech on why you should stop whaling. Then we had Emily doing hers on why we should stop poaching animals. There was one that I quite liked which was Jamie`s she was doing hers on why we shouldn`t do Homework I would agree with her on that. The last person that we had was kaia doing hers on why kids shouldn`t be forced to eat poridge and after everyone had finished they announced the winner and the winner was Emily. Then the judges gave them all a certificate. I think did a great job because I would be nervous if I had to stand up and do my speech in front of the all the parents and all the year 4s. 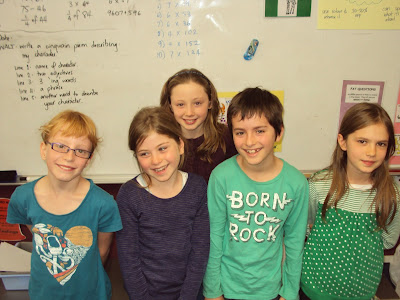 Hi Georgia, I agree it must be nerve wracking delivering a speech in front of such a large audience. I think you have given a great recount of the exciting speech finals. I loved all the different topics that were covered. It sometimes gives you ideas for your own speech next year!

Hi Georgia,
I liked how you told the oder of the speechs. I hope next year.
from Ashley and griffin!!!